Orion Integrated Systems is excited to announce the addition of SolteQ to our line card! SolteQ is a provider of high quality, eco-friendly solar roofing solutions for clean, sustainable energy for the home.

Designed for both efficiency and aesthetics, SolteQ solar roofing is beneficial to the environment, the home, and the budget. Get in touch today to find out more about SolteQ’s solar roofing solutions!

Meet the outdoor smart plug
from Caséta by Lutron

Smart control that
lets you do more outdoors

Unlike traditional timers, the outdoor smart plug stays on the right time year round, even with Daylight Savings.

Transform the ordinary into the extraordinary with a single touch— spark the senses and curate magical experiences using light as your canvas. The Alisse wall control integrates cutting-edge technology and timeless design that is intuitive and completely personalized to your needs.

Join us for a night of celebration as we honor the 2020 Lutron Excellence Awards winners, the 2020 Hall of Fame inductee and raise a glass to you!

Click here to register for the event. Livestream links will be emailed to you prior to the event.

Get charged-up for a special “power hour” panel discussion with architects from around the country to talk about their first-hand experience with the sonnen ecoLinx. During this interactive session, they will provide their personal feedback, learnings, tips, and suggestions on how to start incorporating energy storage, solar, and energy automation into your residential designs.

Moderated by sonnen, panelists include:

Get charged-up for a special “power hour” panel discussion with integrators from around the country to talk about their first-hand experience with sonnen projects. During this interactive session, they will provide their personal feedback, learnings, tips, and suggestions on how to get started with sonnen and energy automation.

Moderated by sonnen, panelists include: 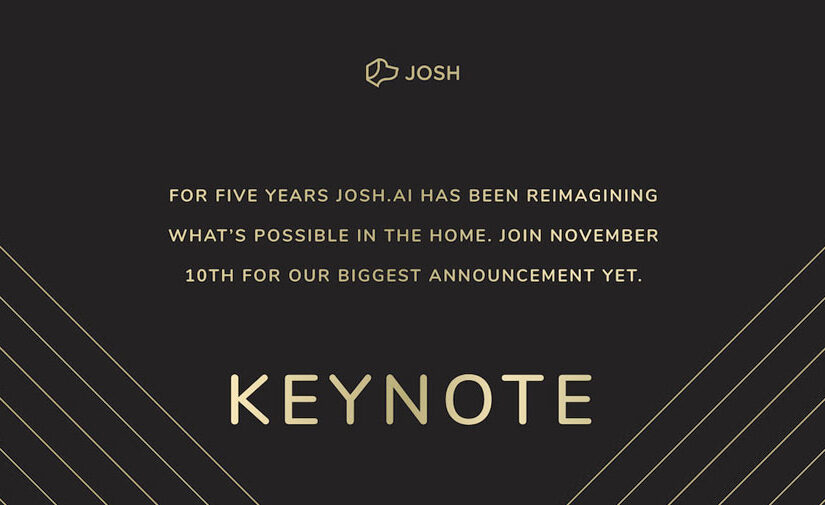 Imagine what would be possible if Josh.ai brought their award-winning engineers and the industry’s most innovative architects and designers together to revolutionize the smart home — again. Soon you can stop imagining. Join us November 10th for Josh.ai’s biggest announcement yet!

WHAT IS IT?
This is the first ever Josh.ai Keynote, a completely digital event with the Josh executive team and industry insiders to unveil the latest innovations in the smart home. The keynote will last about an hour.

Introducing Leon Live, a new video series we’re rolling out to keep you connected to everything we have going on here at Leon. We’ll be sharing all sorts of content, from product releases, to music performances, to art and design inspiration, local community initiatives, and more—and we might even let Noah on unsupervised sometimes…maybe.

The series launches this Thursday @ 7:45pm EST with a very special guest, Devon Gilfillian, who will be on to play a song for us and talk with Rob Reinhart from Acoustic Cafe.

Directly following the interview @ 8pm, we’ll be live-streaming a benefit concert that Devon is hosting called, “There’s An Election Going On”, that is raising funds for The Equity Alliance, a non-profit that fights voter suppression in low-income communities and communities of color. The concert will feature Devon, a 10-piece band, and several guest artists covering Marvin Gaye’s iconic 1971 album “What’s Going On”, front-to-back.

Lutron is pleased to announce the launch of Lutron CONNECTION 2020!

This six-week virtual campaign is designed exclusively for the residential dealer community. Explore the new digital platform where we will introduce this year’s innovations via a flexible and engaging schedule of events that will deliver the tools and learnings needed to ensure your continued success with Lutron lighting, shading and fixture control solutions.

Click here to get an advanced look of what’s coming. Register early for exciting product unveilings, podcasts, trainings and live events being offered each week.

We invite you to experience luxury and discover dynamic light, intelligent shades, and powerful lighting controls from the brand you trust.

We look forward to connecting with you!

Be one of the first to discover the DID Series recessed LED lighting system. Unveiling at the 2020 CEDIA Expo Virtual experience, the DID Series builds on DMF’s award-winning modular foundation. These all-new downlights improve on every major metric by which light quality is judged and deliver unmatched adaptability. Specifically designed to enhance home integration projects, the DID Series will be exclusively available to custom integration dealers.

In addition to sharing new and existing products, DMF Lighting will be hosting a pair of remote training sessions, Introduction to Lighting & Lighting Design and Benefits of Modular Lighting, at CEDIA Expo.

Visit DMF’s virtual booth to find out more, or click here to schedule a one-on-one meeting!